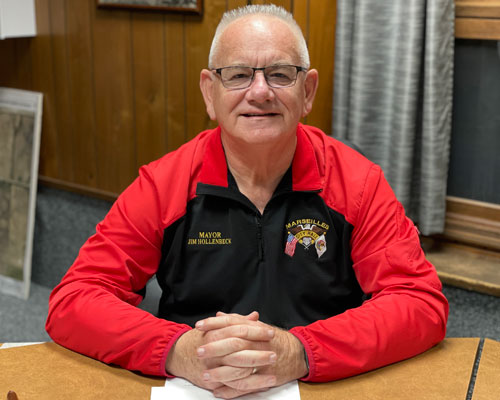 Welcome to the Commissioner’s Corner

Mayor Jim Hollenbeck. Graduate of Seneca High School. Attended IVCC and University of Illinois in Champaign where he was certified as a police officer and firefighter. Hollenbeck joined the Marseilles Police Department on February 14th 1975. Hollenbeck served as an investigator & juvenile officer and was appointed Assistant Chief of Police in May of 1979. In March of 1985 Hollenbeck advanced his career to the State of Illinois, Officer of the State Fire Marshal as a Special Agent in the Arson Division. Hollenbeck was promoted to Area 2 Commander of the Arson Division in 1989 and being a huge animal lover was instrumental in the forming of the K-9 Unit that were subsequently trained to sniff out accelerants at fire scenes. Hollenbeck’s duties then included being the K-9 Supervisor statewide. Hollenbeck in 1996 went to Internal Affairs Unit for the Illinois Department of Corrections investigating employee misconduct and malfeasance as well as crimes committed within the penitentiary or upon their property.   After 911 Hollenbeck was assigned to the FBI’s Joint Terrorism Task Force (JTTF) in Chicago. Hollenbeck was later appointed Deputy Commander of Investigations and Intelligence. His duties consisted of Supervising the “Operation Safe Neighborhood” a federally funded program in Chicago as well as the Parole Compliance Intelligence Unit that conducted Parole Compliance Checks throughout the state in addition to Fugitive Apprehension worked with the US Marshal’s Great Lakes Fugitive Task Force. His 5-member dedicated team routinely recovered over a hundred guns a year off the streets of Chicago alone and returned Parolees back to prison. The team also had great success in Peoria, Rockford, and numerous other cities and rural areas of throughout Illinois. The Intelligence Unit and Command Centers were continually responsible daily for obtaining intelligence assisting Law Enforcement agencies with solving crimes. During his law enforcement career Hollenbeck also joined the Marseilles Fire Protection District on July 1st, 1977, as a Firefighter, Emergency Medical Technician, and Certified Arson Investigator. Hollenbeck stills serves the fire district as Deputy Chief.   Hollenbeck is also a certified police officer, field training officer, with specialized training in investigations & hazardous felony arrests. In 2007 Hollenbeck run for the Marseilles City Council and upon election was appointed a Commissioner of Public Health and Safety. After the elections in 2015 Hollenbeck was appointed to Commissioner of Accounts and Finances. In 2017 Mayor Trager passed away in office and in January of 2018 Hollenbeck was appointed Mayor in January to finish Trager’s term. Hollenbeck was then elected Mayor in 2019. During his career Hollenbeck received numerous letters commendations, awards, and medals including Meritorious Service and Life Saving. Hollenbeck has a great love for the city of Marseilles and surrounding area. Hollenbeck’s vast range of experience in public service since the age of 21 has made his job as Mayor easier and enjoyable. Hollenbeck is a full time Mayor and can be seen a city hall daily and, in the evenings, he is usually attending meetings of various boards and organizations, or training at the fire department. Hollenbeck’s slogan is “Focused on Our Future”. Hollenbeck has been successful in Obtaining many grants to benefit the city and its infrastructure; with one of the main accomplishments being the extension the city water and sewer to Interstate 80. Hollenbeck stated that he is very fortunate to have a great city council to work with whom share the vision of focused on our future. They are all willing to move the city forward. Hollenbeck has four children: Michael, Aaron, Kenneth, and Ashley. Hollenbeck has four grandchildren: Cameron, Cade, Konnor, and Aadyn and is expecting Grandson Baby Smith in July. Hollenbeck is an avid White Sox fan and goes to Arizona yearly for spring training with a group of friends. Hollenbeck also enjoys bowling, fishing, camping and NASCA.